The first time I ever hear the word Reiki was from a friend who was patting my dog and hesitated when her hands were over my dog Morgaine’s chest.

She had a strange look on her face.

“Does Morgaine have problems with her heart?”

She had just been diagnosed with a heart murmur the week before.  I asked her why she would ask me that question.

She told me, “my hands were drawn to her chest and they became warm.”

When I asked her more questions she told me that she was a Reiki Master and sometimes, her hands would turn on.

Well, I then read everything I could about Reiki. I took classes and loved the idea of Reiki.  I am a nurse and I practice Holistic Nursing, so I was interested in something that could help my patients.

That was in 2003.  I started studying and practicing Western Reiki.

I enjoyed being able to offer Reiki to my friends and family.  I had never had the desire to ever want to teach Reiki to others.

That was until I got a call from a friend.  She told me that she had received a flyer about Frank Arjava Petter.  I told her that I had one of his books and would love to go to Boca Raton to take a Jikiden Class.

After only a few minutes of listening to Arjava discuss Jikiden Reiki I knew my world was about to change.  It was like a light switch had been turned on.  It all made sense.  Keep it simple.  Reiki is Reiki is Reiki.

But the biggest change for me was that I wanted to share Jikiden with so many people! Which then grew into the desire to want to teach and further spread this beautiful experience of Jikiden Reiki.

Now there are times when my hands, turn on. I am always grateful that I have the ability to share the wonders of Jikiden Reiki, and I look forward to being  able to teach it to others as well.

Kim has been a Nurse for 20 years at Boston Medical Center. She was an Adjunct Professor for Mass. College of Pharmacy and Health Sciences. She is currently, Charge Nurse in a Hospice Unit. Kim started studying Western Reiki 15 years ago. She has been studying and practicing Jikiden Reiki since 2014. Kim is also a Certified Canine Rehab Practioner and Therapy Dog Handler. View all posts by findgoldenlight 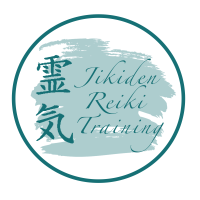